Issuer Raises $60 Million to Pursue an Acquisition In the U.S. Senior Housing and Care Industry

Industrial Logistics Properties Trust Is Second REIT New Registrant In As Many Weeks, Tenth of 2017

Industrial Logistics Was Formed Recently to Own and Lease Industrial and Logistics Properties Throughout the U.S. 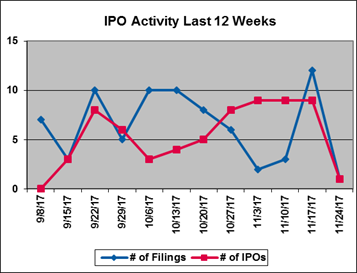 
Click on the blue numbers to drill down for more information. Once in the drill down, click column headings to sort the data in an order more useful for answering your questions.

Stitch Fix made its public market debut recently at $15 per share, $3 below the bottom of its published price range of $18 to $20 per share. The price cut was widely attributed to lower demand due to the relatively poor performance of high-profile technology IPOs like Blue Apron and Snap. However, a closer look at November’s deals shows that pricing weakness spread beyond just high-tech deals.

By November’s midpoint, six of the month’s 19 completed offerings had priced below the minimum filing price range, with each of those six issuers representing a different industry. November’s total is double the number of deals that priced below their stated range in each of September and October. Prior to November, May had seen the greatest IPO pricing instability with seven out of 21 new issues selling below the initial range.

The 2017 IPO company that slashed its offer price the most is YogaWorks. The company filed a price range of $12 to $14, but priced at $5.50 per share, a 57.7% drop from the midpoint of the initial range. Three other new issuers have priced 50% or more below the midpoint of the filing range. Immuron reduced its price by 52.4%, Calyxt by 51.5% and Elevate Credit by 50%.

First Day Movement - In general, IPOs completed between January 1st and November 15th started off well, with 93 new issues gaining at least 1% in value on their first trading day. Seven of the year’s IPO companies saw their shares remain flat on initial trading day, while the shares of 33 issuers lost value on the first day.
The top first-day gainer in 2017 is Newater Technology, whose shares jumped 78.6% on their first trading day. Rhythm Pharmaceuticals posted the second largest gain by climbing 76.5% from $17 to $30 on its initial trading day. At +72.4%, CarGurus enjoyed the third largest first-day gain of the year so far. In all, nine issuers saw their shares rise 50% or more on their first day. 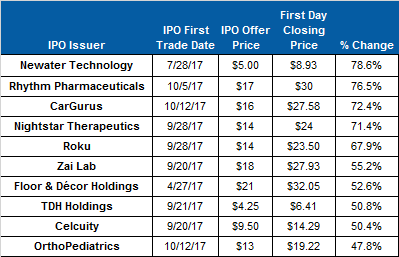 Post First-Day Performance - Since its impressive first-day gain, Newater Technology has continued to climb, posting a 98.2% gain through November 21st. The year’s top performing IPO through that date is AnaptysBio, whose shares have risen 428.2%. Seven other companies’ shares have more than doubled in value, led by SMART Global Holdings (+232.1%) and UroGen Pharma (+214.7%). Overall, 84 companies that have made their market debuts this year have increased at least 1% in value since they began trading.

Despite getting off to the second fastest start of the year, shares of Rhythm Pharmaceuticals have slid backwards in subsequent trading. After a 76.5% first-day gain, Rhythm’s shares traded 64.1% above the IPO price as of November 21st. On the other side of the spectrum is G1 Therapeutics, whose shares finished their first day (May 17th) with no gain, but as of November 21st had risen 35% above their debut price.

Of the industries that have produced at least five IPO companies in 2017, pharmaceutical preparations (SIC 2834) has turned in the best aftermarket performance as a group. The sector is up 31.5% as a whole so far this year. Although some software companies have struggled, as a group prepackaged software (SIC 7372) shares are up 29.6% as of November 21st.

Four New Registrants Amend Their Filings for the First Time: