Bison Capital Acquisition, Which Operates Out of Beijing, Raises $52.5 Million In Its Debut

Hennessy Capital Acquisition Corp. III Is the First Wyoming-Headquartered Company to Go Public In the U.S. Since November 2009

Constellation Alpha, Like Bison Capital, Is Incorporated In the British Virgin Islands

Company Spent Only a Month In Public Registration

Federal Street’s Sponsor Has Agreed to Purchase $13.75 Million of Warrants In a Concurrent Private Placement

Company’s Customers are Intelligence, Defense and Space Agencies Including NASA, the Department of Justice and the NSA

Calyxt Will Continue to be Owned by Cellectis Following the IPO

PetIQ, Which Will Undergo a Corporate Reorganization to Prepare for the IPO, Registers $85 Million Offering

Company Makes Prescription-Grade Medications, Other Health and Wellness Products for Dogs and Cats

Only SIC 5122 (Wholesale-Drugs, Proprietaries & Druggists’ Sundries) IPO Executed In Past Ten Years Was In October 2014

Company Is Controlled by PE Firm Great Hill Partners, Which Has Indicated an Interest In Purchasing IPO Shares

YogaWorks Has Recapitalized Preferred Shares and Notes, and Will Effect Stock Split Prior to the Offering

No Forms RW Filed for Seventh Straight Week; Q2 Likely to be Slowest for Withdrawals In More Than a Decade 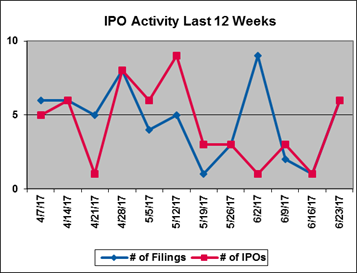 and drill down into the different SIC Codes to see

Click on blue numbers to drill down for more information.

Select a number of issuers’ final prospectus business descriptions by clicking in the boxes of those you wish to review in the fourth column (placing a check-mark in each box), and clicking the [COMPARE] button at the top of the fifth column.

Willing to Wait: RWs Dwindle as Companies Try to Get IPO Timing Right

The IPO market enjoyed a productive second quarter in which 50 deals were completed (through June 20th) compared to 28 in the first quarter. Noteworthy among the second quarter IPO statistics is the low number of withdrawals. With only a week remaining in the quarter, only two Forms RW have been filed since the beginning of April. Barring a rush of withdrawals before the end of June, it will be the lowest quarterly total for RWs in the past ten years. The only other quarter with an RW count in the single digits during that time period was the first quarter of 2010 with 8.

As of June 20th, the market had gone seven consecutive weeks without the withdrawal of a preliminary registration. The drought suggests a slowdown in M&A activity, which is one reason companies pull out of planned IPOs. In addition, IPO hopeful companies seem willing to wait to get the timing of the offering right, rather than choosing to cut and run.

The reason most often cited for an IPO withdrawal is adverse market conditions. At the moment, the broader market is strong, giving companies in the IPO pipeline no reason to abandon their plans. Other factors are favorable as well. Deals are getting done relatively quickly this year with 46% of 2017’s IPOs being completed within 30 days of initial public registration. In addition, 57% of new issues have priced within their initial price range. In the aftermarket, 41 of the year’s 76 IPOs are currently trading above their offering price.

Since the start of 2017, there have been 20 withdrawals. At the current rate, this will be the slowest year for RWs in the past decade. Currently, 2013 claims the lowest total in the past decade with 46 withdrawals. Between 2008 and 2014, the average number of IPO withdrawals per year was 72. Last year there were 65 abandoned deals, and 60 in 2015. The 2008 through 2014 average was inflated by 2008, the year the global financial crisis took hold and112 companies withdrew IPO plans. It is the only time the RW count has topped 100 in the past 10 years. 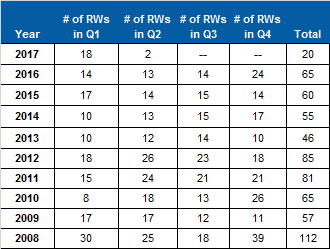 Lead Managers - Of the 200 registrations withdrawn since January 1, 2014, Bank of America was lead manager on the largest number (45). The investment bank was listed as lead underwriter on 22.5% of proposed offerings that were pulled over the past four and a half years. Bank of America was the sixth busiest lead underwriter of completed IPOs in that same period with 117 new issues.

JPMorgan was the busiest lead manager of IPOs between January 1, 2014 and June 20, 2017 with 153 Pricings. It was lead underwriter on 44 withdrawn IPOs (22%) since the start of 2014, the second highest total behind Bank of America. The two investment banks have each tallied five RWs so far in 2017, tying it for first place this year. Five banks are tied for third this year with three withdrawals apiece.

Since January 1, 2014, Citigroup has worked on 34 withdrawn deals, the third most over the past several years, and three ahead of Goldman Sachs. Credit Suisse rounds out the top five with 30 withdrawals in the 2014 through June 2017 timeframe. 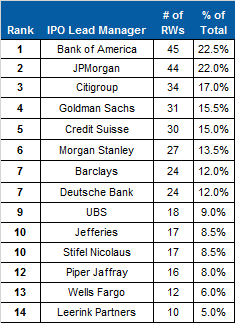