Fifth Time In 2017 That a Week Has Passed without a Completed Offering, First Time Since Early July

Social Capital Hedosophia, Whose Managers Include Former Facebook and Twitter Execs, Will Invest In Emerging Tech Cos.

Beijing-Based Secoo Holding Is the Fourth Chinese New Registrant In August, Ninth of the Year

In August, Krystal Raised $7 Million Through the Issuance of Preferred Shares to an Affiliate of India's Sun Pharma 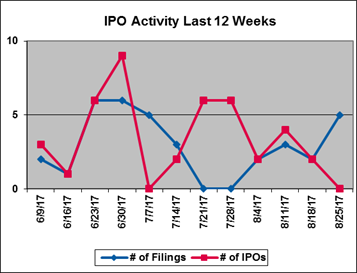 
Click on For the period at the top of the table to open a calendar function and use the drop down boxes to select a date range, then click the [REFRESH] button to update the Vital Sign table of data. Click column headings to re-sort the table’s data.

With three completed deals and four new registrations so far in August, non-U.S. companies are helping to bolster IPO numbers in an otherwise lackluster month. Historically, August is among the slowest months of the year for IPOs, and 2017 is no exception. With no IPOs in the most recent week, the monthly total is holding at just eight new issues to date.

August's tally represents a slowdown from July when 14 deals were completed, and from the 20 IPOs in June. This is consistent with August’s IPO totals over the past several years. The number of new issues last August dropped to eight from 14 in July, and in 2015 they fell from 19 in July to 12 in August. Even in 2014, the busiest year for new issues in the past decade, August saw only 10 completed offerings following 37 in July.

This year, three of August’s eight IPOs and four of the month’s seven new registrations through August 25th were by non-U.S. companies. Overall, offshore companies have completed 17 new issues this year, accounting for 15% of the market. In 2016, 23 IPOs by non-U.S. issuers comprised about 20% of the year’s total. At the current rate, 2017 will certainly eclipse 2016’s total, but is likely to fall short of the 41 and 67 foreign issuers in 2015 and 2014, respectively.

Chinese Issuers – China is once again a central player in the discussion about U.S. IPOs by companies headquartered overseas. It is leading the way in 2017 with four IPO companies, one ahead of Canada’s three new issuers through August 25th. China is also home to nine of the year’s 20 non-U.S. new registrants, including four filers in August.

Geographic Diversity – Despite China’s dominance, the non-U.S. segment of the IPO market continues to show considerable geographic diversity. To date, companies from 11 different countries have participated in the U.S. IPO market this year. Last year, companies came to U.S. markets from 14 countries, and 16 nations were represented in 2015. Issuers from 20 countries participated in 2014’s U.S. IPO market. After China and Canada, the U.K. (two IPO companies) is the only other country that is home to more than one new issuer in 2017. This year, Denmark produced an IPO company for the first time since January 2015.

Israel is home to one new issuer in 2017, matching its entire output for 2016. Those numbers represent a slowdown for Israel, which has routinely produced multiple IPO companies—seven in 2015 and 12 in 2014—in recent years. Noticeably absent so far in 2017 is Bermuda, which was home to nine IPO companies between 2014 and 2016.

New Registrations – This year, 20 new non-U.S. companies filed preliminary registrations through August 25th. During the same period last year, 13 foreign issuers publicly filed plans to begin trading in U.S. markets. Of the 20 new filers this year, 13 have already completed their offerings, which does not leave much of a pipeline of foreign issuers waiting to go public in the U.S. Those companies that have pending registration statements as of August 25th are from Argentina, China and Israel.

Albertsons Companies Files Amendment No. 11, Is Back Among Eight-Week Active Registrants

One Other Registrant Files Amendment

Zai Lab Files Amendment No. 1 In Week After Publicly Registering