Forum's Sponsor Recently Bought 3.6 Million Class F Shares That Will Convert to Class A Shares When Target Is Acquired

One Minnesota-Headquartered Company Has Completed an IPO In U.S. Markets In Each of the Past Two Years 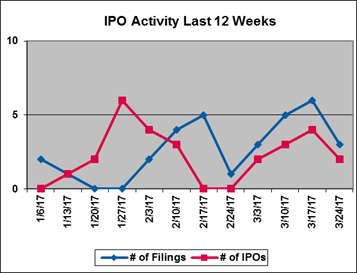 An interactive table that lists every company to file an initial public IPO registration statement.

Change the date range by clicking on [For the period] in the upper left hand corner of the IPO Vital Sign. Use the drop down boxes to select new Start and End Dates. Click the [REFRESH] button to obtain the new date range’s data.

The IPO market is off to a reassuring start in 2017 after posting a 37% drop in deals in 2016 with the lowest IPO totals since the financial crisis. With one week left in the first quarter, 27 deals have been completed this year. Only 11 IPOs were completed in the first three months of 2016. New registrations are also slightly outpacing last year with 32 new registrations compared to 25 during the same period in 2016.

2017's early momentum includes the successful $3.4 billion debut of Snapchat developer Snap Inc., and a surge in new registrations from the energy industry. The positive attention generated by Snap and other recent new issues has helped, as has greater stability in world markets. However, it is unclear how the market will respond as the new presidential administration moves forward with its aggressive agenda. It also remains to be seen if a robust M&A market and the ready availability of private financing will cut into IPO totals as they did in 2016. We asked Marc Jaffe, a partner with Latham & Watkins, to discuss the state of the market at the moment and what the rest of 2017 might bring for IPOs.

Marc Jaffe, a partner in the New York office of Latham & Watkins, is the global Chair of the Corporate Department and former global Co-chair of the firm’s Capital Markets Practice. His practice centers on corporate finance and general securities and corporate matters. His clients include US and foreign investment banks, New York Stock Exchange and Nasdaq-listed companies, non-US corporations, private equity funds and mezzanine investment funds. Mr. Jaffe has substantial experience representing issuers, investment banking firms and investors in public and private debt and equity offerings and lending transactions of all kinds in several industries. He has also represented investment banks, companies and investors in exchange offers, tender offers and consent solicitations, restructurings, bridge lending and loan commitments and other financing transactions. Mr. Jaffe was recognized in The American Lawyer’s “Dealmakers of the Year” issue for his leadership of Manchester United’s 2012 IPO on the New York Stock Exchange. He was also ranked as one of the leading capital markets lawyers by each of Chambers Global, Chambers USA, IFLR1000 and The Legal 500, and recognized by The Legal 500 Latin America.

IPO Vital Signs: In 2016, the IPO market had its slowest year since the financial crisis with a 37% drop in deals from 2015’s total. The M&A market was robust last year, which cut down on the number of new issues. What will it take to get the IPO market moving again?

Marc Jaffe: While market volatility and the uncertainty surrounding the US election and Brexit weighed on US IPO activity in 2016, strong equity market performance, increasing market stability in Europe and the publicized success of recent IPOs are elements contributing to an uptick in IPO activity and outlook in 2017. Many of the deals that were largely teed up but not executed last year have come to market or are soon to come to market, and we anticipate more activity in the second and third quarters of 2017 given the significant backlog. The relative success of recent high profile IPOs is also clearly enticing issuers to gear up to go to market in the second half of this year. The strong IPO pipeline representing a range of industries coupled with a stabilized geopolitical environment could indicate a healthier IPO market in 2017.

IPOVS: Companies are staying private longer, and there are more companies than ever before with $1 billion+ in market cap that have stayed private. What are some of the factors behind this trend? Is the pressure building for well-capitalized private companies such as Uber and AirBnB to go public?

Mr. Jaffe: More flexible securities laws like the JOBS Act, Reg A+ and the abundance of private capital have made it easier for companies to stay well-funded and private longer. The private market has strengthened with regard to secondary liquidity and continues to attract institutional investors seeking growth equity returns. While certainly investors in well-capitalized private companies, particularly the venture capital firms, will want to see a return to their investors over time, I do not believe they are feeling pressure to go public in the near-term given that many of these businesses continue to show tremendous growth (even if they are not yet making money). With certain of these billion dollar plus market cap private companies there are fundamental regulatory and market questions that need to be resolved before they can tell their best go-to-market story.

IPOVS: There has been a lot of press lately about deals where the issuer keeps voting control by maintaining dual classes of common shares. If a client approached you that wanted to execute this kind of offering, what would you counsel them to keep in mind regarding the benefits and risks of the dual class structure?

Mr. Jaffe: The benefits of a dual-class structure are often seen when a company is strongly identified with the founders, or a family has controlled the company for a long period of time. Markets are typically more receptive to a dual-class structure in these scenarios because having the founders or family involved is seen as a benefit to the value of the company. The dual-class structure allows holders of the high vote class of shares to maintain voting control even as their economic interest falls proportionally lower. Within certain time and minimum economic holding parameters, the market seems to be largely receptive, where a story about the value of continued control is compelling, to the weighted voting afforded those founders. Founders often have a longer term vision for the companies they started, and an IPO issuer can benefit by locking those persons’ control in.

There can be market pressure against such structures where investors do not see the value of entrenched managers or guaranteed board control. There is clearly a large element of trust that investors must sign up to share. Dual class structures that vary from what the market sees as current norm for high vote/low vote splits, rights and fall-away provisions press that trust and can have marketing implications.

IPOVS: The pharmaceutical industry dominated the market for the fourth straight year in 2016, but is off to a relatively slow start in 2017 with only one preliminary registration to date. Are there any particular industries that you believe will perform well in 2017?

Mr. Jaffe: While robust deal activity across sectors is expected in 2017, technology, consumer retail, industrials and energy companies in particular are poised to perform well. Restaurant IPOs could again be popular as a stronger economy drives consumers to dine out, and the fast-casual industry’s emphasis on healthy options attracts more customers.

I believe that foreign private issuers across a range of industries will continue to seek opportunities to raise equity capital in the US, as the US capital markets remain the most robust and liquid of the global markets.

IPOVS: What do you foresee for the remainder of the year for IPOs? What factors will contribute to, or detract from, the new issues market for the rest of 2017?

Mr. Jaffe: The strong equity markets are driving an increase in sponsor-backed equity deals, as private equity firms are looking at an IPO as a potentially high-value exit route. The trend toward using a dual-track process also is likely to continue, particularly for private equity and venture capital-backed companies, because it offers sellers a number of advantages in their search for liquidity and maximum value. It certainly allows sellers to preserve optionality as they evaluate the attractiveness of multiple exit (or partial exit) options while hedging against IPO market volatility and overall deal uncertainty.

As Washington and the business community are intensely focused on tax reform in 2017, there is a high expectation that some form of tax reform will become a reality in the near term. The proposed reforms would impact the factors issuers consider when they determine where to raise capital and whether to do so by issuing debt or equity, and we are watching these key transactional considerations closely.

A slowdown or pause in what has been a “hot” stock market since the US election could pose a challenge for IPOs. Whenever there is a resetting of market dynamics, there is typically a pause in IPO activity because the market has a more difficult time valuing a company.

Overall, with a robust IPO pipeline, calmer geopolitical environment, and markets at record highs, the prospects for IPOs in 2017 are strong.